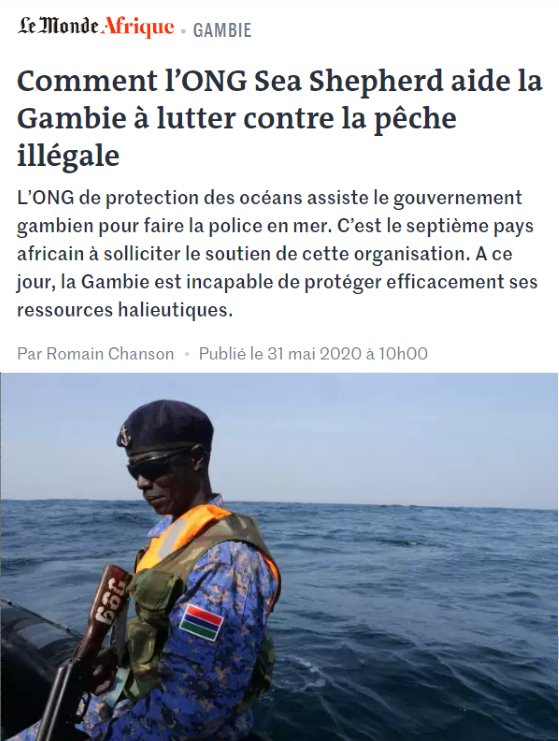 May 31st -- A multi-page feature article written by Le Monde journalist Romain Chanson, "Comment l’ONG Sea Shepherd aide la Gambie à lutter contre la pêche illégale" about Sea Shepherd's Operation Gambian Coastal Defense. "In the event of a violation, the Gambian coastguard, supervised by an inspector from the Ministry of Fisheries, makes the arrest. Sea Shepherd does not have the power to arrest offenders. The NGO offers technical support and expertise, but does not replace the Gambian authorities. A contract was signed in 2019 with the Gambian government and runs until 2021. One month of patrol costs about 100,000 euros to the NGO, which lives on donations." 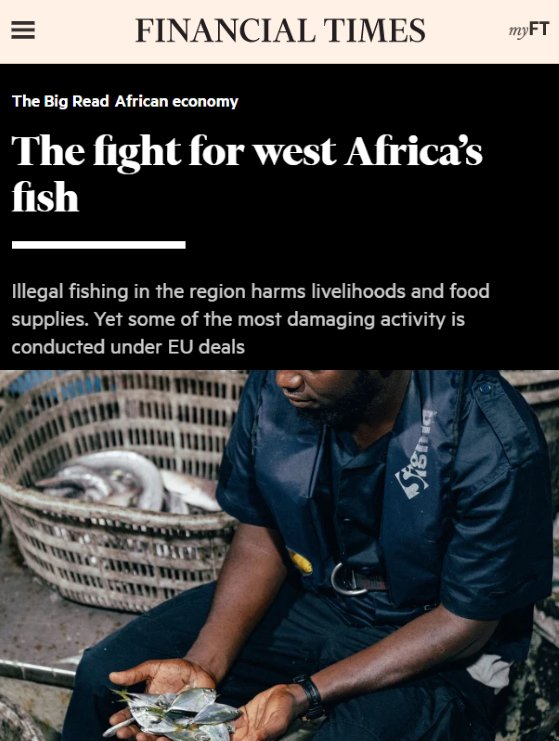 March 12, 2020 - Countries that have already wiped out their own fish populations are now overfishing in West Africa's waters. Who's responsible and how can we stop it before it's too late? Financial Times journalist Neil Munshi embeds on Sea Shepherd's illegal fishing patrols to investigate."Officials from The Gambia, Sao Tomé and Gabon say that without Sea Shepherd, which has helped catch scores of illegal fishing vessels, they would be unable to patrol their waters. It was also instrumental in Gabon’s decision to let its partnership agreement with the EU lapse four years ago. While taking Gabonese officials on patrols of their waters, the group found that European tuna boats had annually been catching up to 60,000 tonnes but only declaring 5,000-15,000 tonnes — and must have been for years." 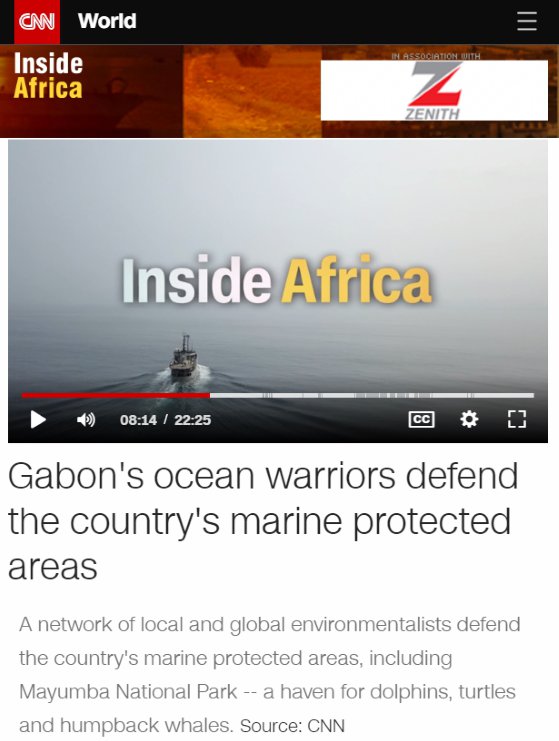 November 2, 2019 -- This 22-minute news report for CNN's "Inside Africa" series features Sea Shepherd's Operation Albacore, our campaign in partnership with the government of Gabon to protect marine wildlife and stop illegal fishing in Gabon's marine protected areas, including Mayumba National Park -- a haven for dolphins, turtles and humpback whales. 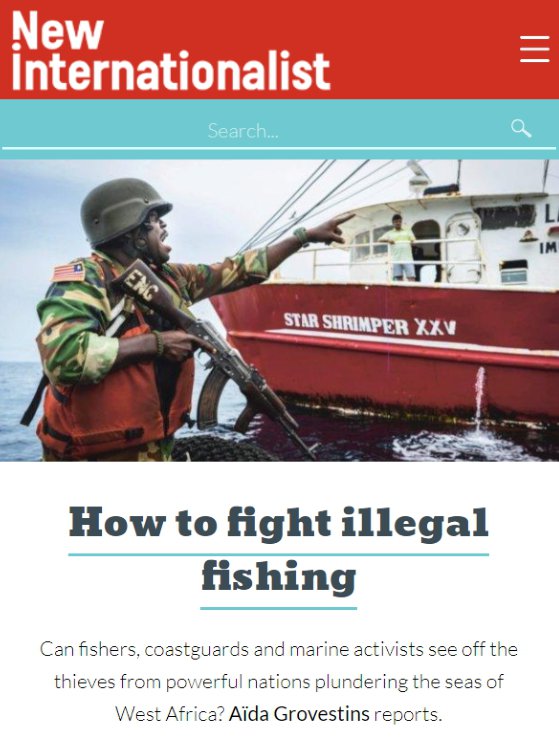 September 26, 2019 -- Journalist Aida Grovestins reports on Sea Shepherd's efforts to stop illlegal fishing in Liberia for Operation Sola Stella: "In February 2017 the Liberian army started joint at-sea patrols with the ocean conservation organization Sea Shepherd. The organization provides the Liberian coastguard with a ship, small boats and a largely volunteer crew. Liberia has turned into a regional leader in the fight against illegal fishing. Since the start of this co-operation, 15 fishing vessels have been held for illegal fishing and other fisheries crimes; only three arrests were made in the seven years prior to this partnership. 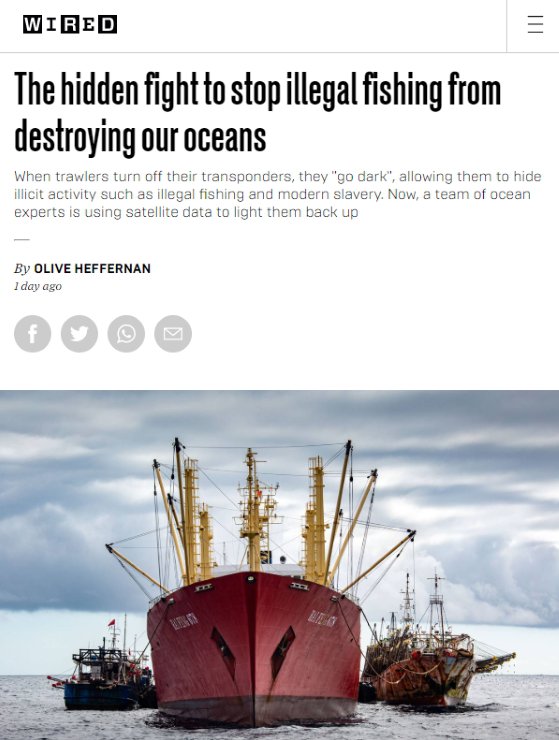 September 3, 2019 - A long-form article in Wired magazine about different technologies being used to combat illegal fishing, following the work of Global Fishing Watch analyst Bjorn Bergman. Several Sea Shepherd campaigns are featured, including Operation Driftnet and the work of SSCS off the coast of Peru. Written by Dr. Olive Heffernan. 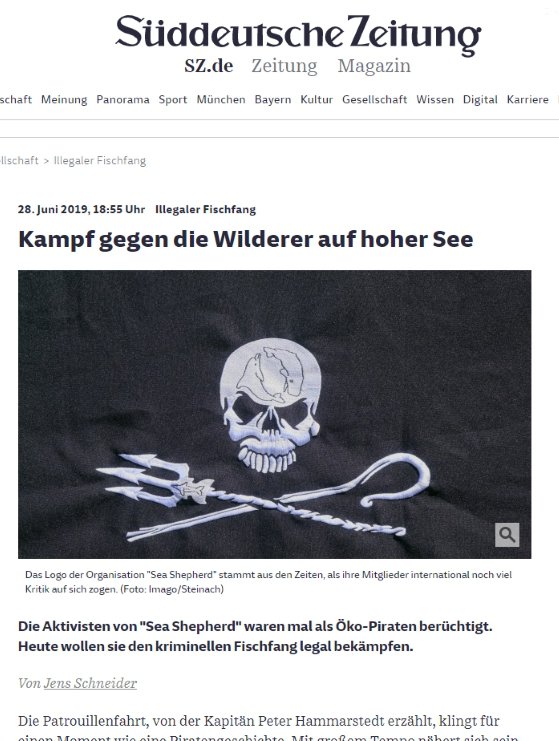 June 28, 2019 -- This article from the German news site, Süddeutsche Zeitung, translated as "The Fight against Poachers on the High Seas", discusses how Sea Shepherd were once known as "eco-pirates", but now are known for working with governments and law enforcement agencies around the world -- notably in Africa -- to combat illegal, unreported and unregulated (IUU) fishing. Written by journalist Jens Schneider. Use Google translate to read this German article in English. 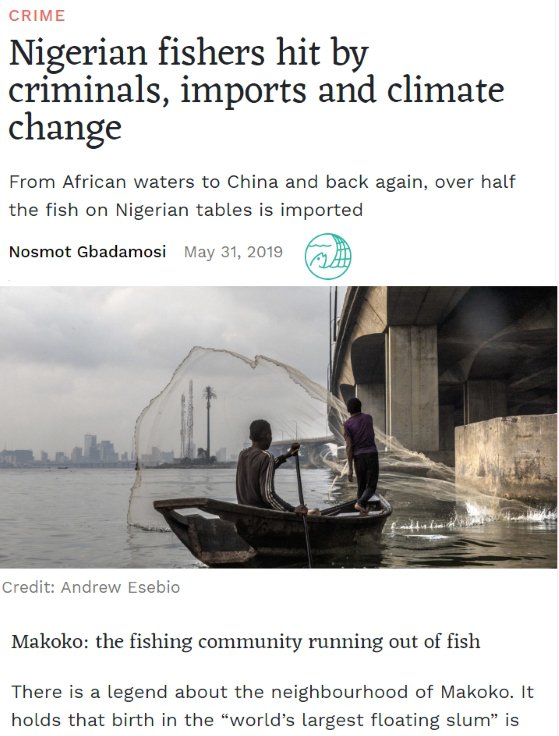 May 31, 2019 - An article detailing how local fishing communities in Nigeria are suffering because of multiple threats, including illegal fishing operators who are taking more than their fair share of the rapidly shrinking fish population. Captain Peter Hammarstedt is interviewed about Sea Shepherd's role in combatting illegal fishing in other West African nations such as Gabon and Liberia. Reporting by Nosmot Gbadamosi for the China Dialogue Ocean website, "dedicated to reporting on, analysing, illuminating and helping to resolve the ocean crisis before it is too late." 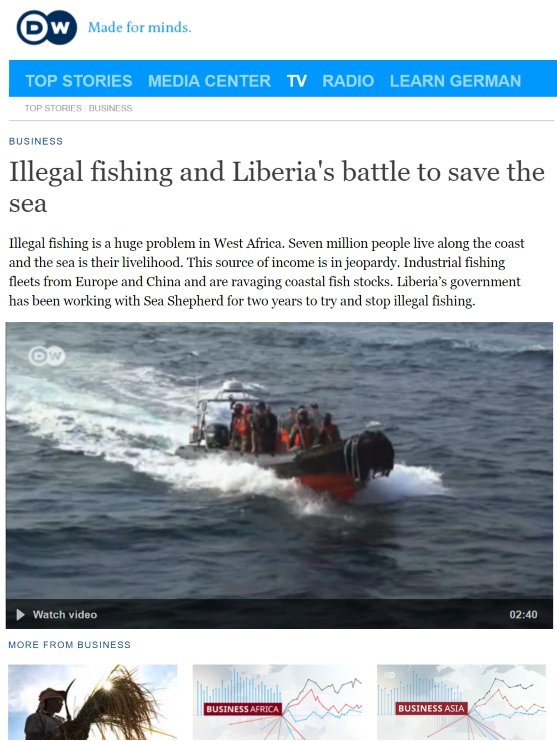 DW.com (Deutsche Welle English)
Illegal fishing and Liberia's battle to save the sea

May 3, 2019 - A video report about Sea Shepherd's partnership with the Liberian Ministry of Defense, Operation Sola Stella, for the Deutsche Welle English business news. "Liberia’s government has been working with Sea Shepherd for two years to try and stop illegal fishing." Reporting by Aida Grovestins and Dominik von Eisenhart-Rothe. 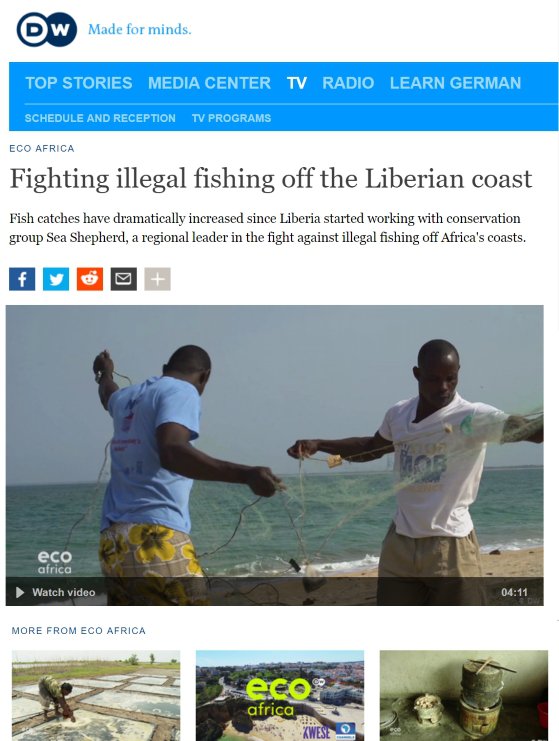 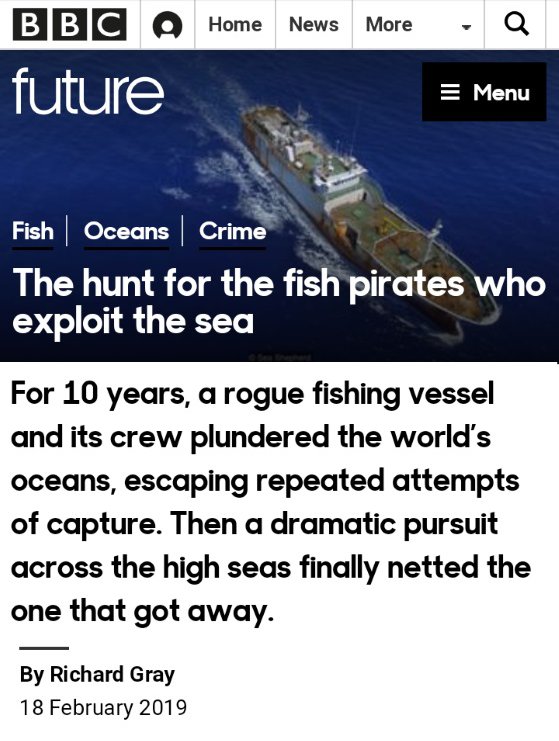 February 18, 2019 - An investigative news story describing the story behind the multi-national coordination of governments and NGOs -- including Sea Shepherd -- that helped track down, chase across several maritime borders, and finally arrest one of the most-wanted poaching vessels on the high seas, the STS-50. Reporting by Richard Gray, Senior Reporter at the BBC, with drone footage from Sea Shepherd's M/Y Ocean Warrior. 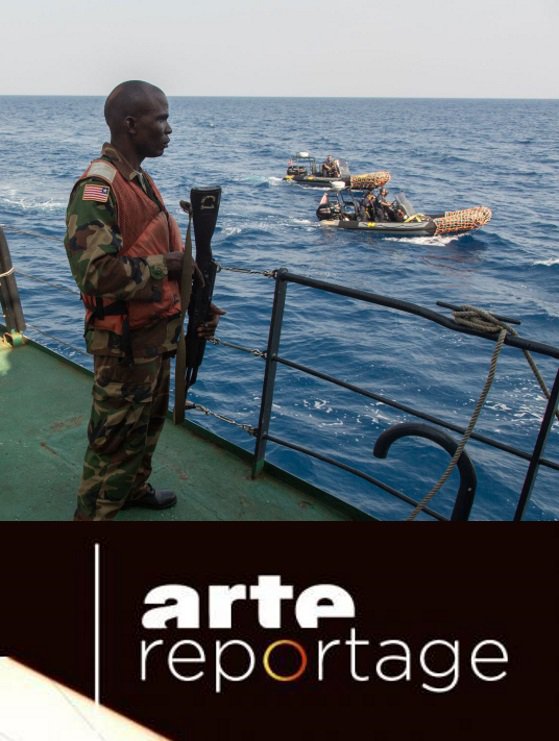 February 8, 2019 - A 24-minutue investigative news documentary about the effects of illegal fishing in West Africa (Senegal and Liberia). Filmed on the M/Y Sam Simon, the second half of the documentary features Sea Shepherd's Operation Sola Stella in Liberia as an example of how partnerships between governments and marine conservationists can successfully fight this problem. It aired on French and German TV in February, and is now available streaming online in French and German, or subtitled in English and Spanish. 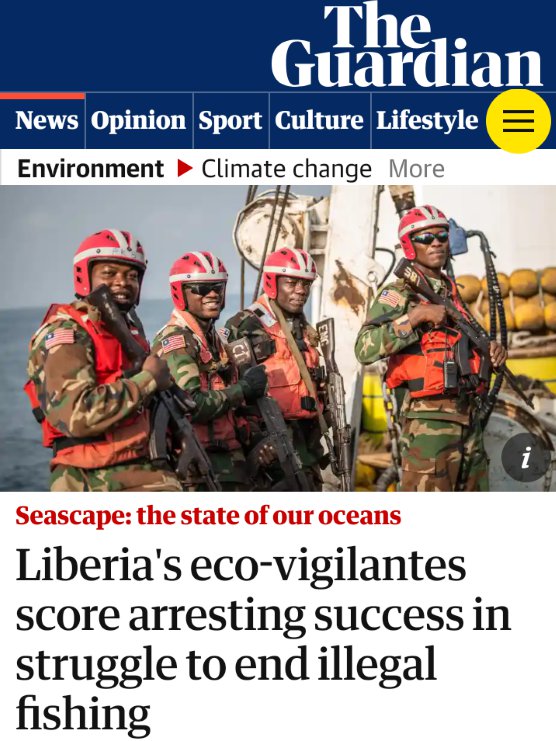 January 28, 2019 - A feature article by Guardian journalist Karen McVeigh about how the West African Republic of Liberia uses Sea Shepherd's assistance to patrol its waters and combat illegal fishing in their sovereign waters for Operation Sola Stella. This article is part of The Guardian's series, Seascape: The State of our Oceans. 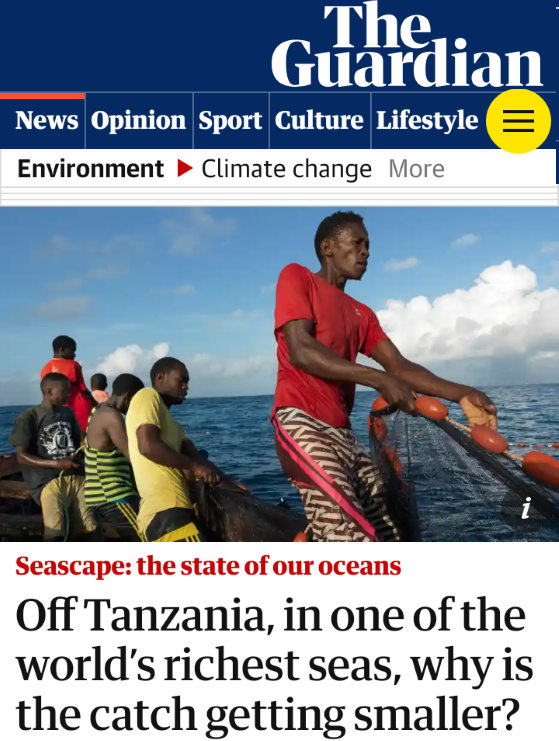 The Guardian (UK)
Off Tanzania, in one of the world’s richest seas, why is the catch getting smaller?

September 15, 2018 - A feature article by Guardian journalist John Vidal about how Sea Shepherd is now assisting Tanzanian government agencies in patrolling the Indian Ocean onboard the M/V Ocean Warrior to stop illegal fishing activities that are wiping out fish populations. This article is part of The Guardian's series, Seascape: The State of our Oceans. 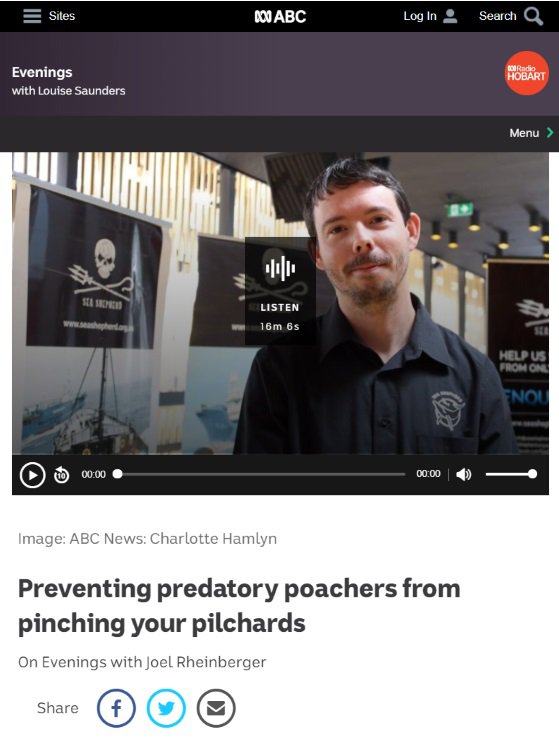 September 4, 2018 - Sea Shepherd Director of Campaigns, Captain Peter Hammarstedt, talks to Joel Rheinberger of ABC Radio Hobart in Tasmania (Australia) about his life on board the M/V Bob Barker, and how Sea Shepherd has been cooperating with African governments to help stop illegal fishing in their oceans (recording 16min 6sec).

Listen to the Interview 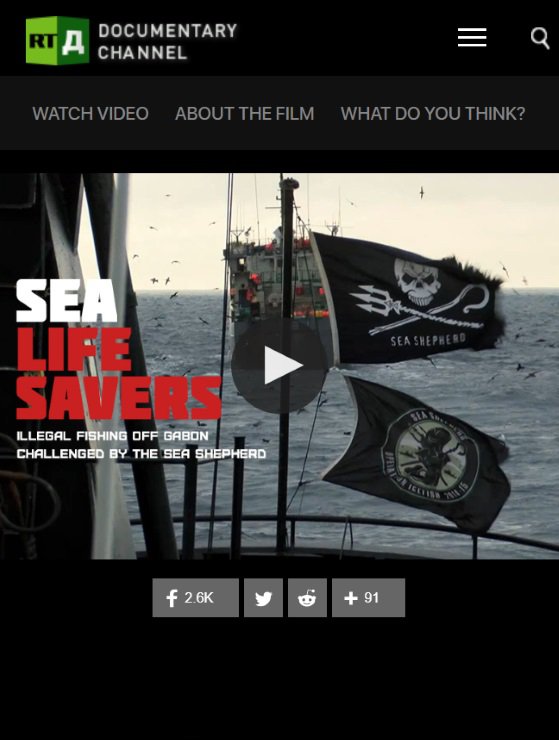 September 22, 2017 - A documentary in English (also available in French) about Sea Shepherd's Operation Albacore on board the M/V Bob Barker, working in partnership with the Gabonese military and government agencies to stop illegal fishing off the coast of West Africa (49mins). 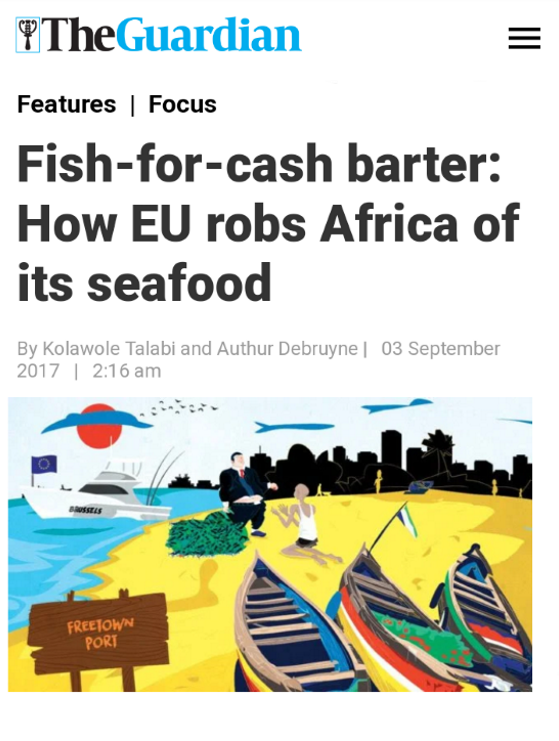 The Guardian (Nigeria)
Fish-for-cash barter: How EU robs Africa of its seafood

September 3, 2017 -- A feature article by Kolawole Talabi and Authur Debruyne about how EU fisheries agreements leave West Africa's waters open to overfishing, including an example from Sea Shepherd's Operation Albacore, a campaign in partnership with the governments of Gabon and Sao Tomé and Principe on board the M/V Bob Barker. 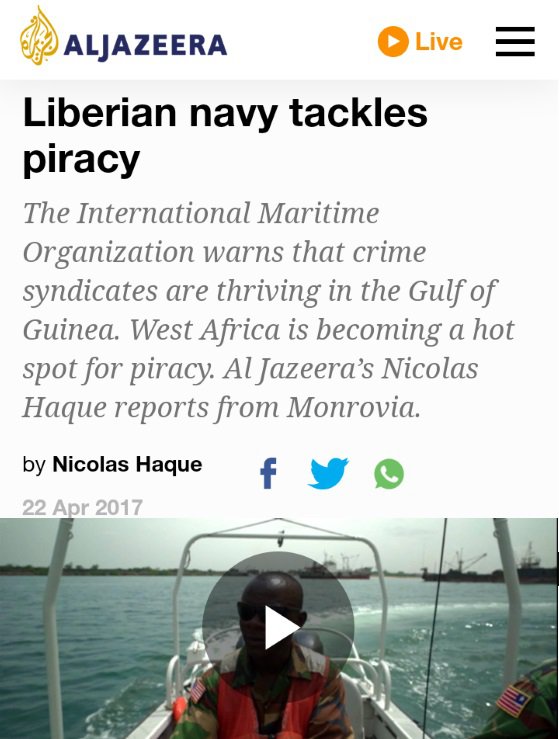 April 22, 2017 -- Al Jazeera’s Nicolas Haque reports from Monrovia about the International Maritime Organization's warning that crime syndicates committing illegal fishing crimes are thriving in the Gulf of Guinea, and how the Liberian military is fighting back with assistance from Sea Shepherd's civilian off-shore patrol vessel, the M/V Sam Simon (2mins, 33sec).

Another Two Trawlers Arrested in The Gambia

Piracy Attack Deterred in the Gulf of Guinea

Sea Shepherd is back defending Italian waters with a new catamaran