Where have the dolphins gone?

Underwater World Singapore (UWS) was owned by Haw Par Corporation. In June 2016, UWS announced its impending closure. Seven Indo-Pacific humpbacked dolphins (also known as Chinese white dolphins) — Jumbo, Pann, Han, Eaung, Splash, Speedy, Splish — were assumed to be in the facility as there had been no announcements of any of their deaths. Commentary by Jaki Teo, Singapore representative for Sea Shepherd Asia. Download the Chinese text here (PDF).

Underwater World Singapore (UWS) was owned by Haw Par Corporation. In June 2016, UWS announced its impending closure. Seven Indo-Pacific humpbacked dolphins (also known as Chinese white dolphins) — Jumbo, Pann, Han, Eaung, Splash, Speedy, Splish — were assumed to be in the facility as there had been no announcements of any of their deaths.

After the announcement, five Indo-Pacific humpbacked dolphins were sent from Singapore to Chimelong Ocean Kingdom (COK) in Zhuhai, China. All five of the dolphins were confirmed to have been received in China.

In the last month, multiple visits to COK by our investigators have recorded only four Indo-Pacific humpbacked dolphins on display. The dolphins have been identified as adult females Pann (renamed 珠珠) and Eaung (桃桃), as well as Pann's offspring Splash (宝庆) and Splish (宝华). All marketing images by COK now only show four dolphins.

Further enquiries with COK staff have returned different responses — one member of staff revealed that the fifth dolphin, a female, was kept in a off-site research facility; one member of staff said that there were only four dolphins left. The City of Zhuhai reported that the dolphins imported included one adult male, one adult female and three children, muddying the waters completely as Pann and Eaung are both adult females.

In addition, we have recorded injuries on both the adult females, as well as a degrading skin condition in Pann. Some dolphins are predisposed to wrinkled skin, which can increase with age as the skin relaxes. However, there are concerns that Pann may be suffering from skin cancer. Md. Hafiz'zan Shah, Executive Director of Wildlife Watchers Singapore, said, "Usually skin cancer condition is a slow developing process, unless there is a biological catalyst to fasten the process, in this case, chlorine. Retirement in a natural sea pen is very much the best option."

Ironically, a 460-square-kilometer national nature reserve for Chinese white dolphins, was established in the very same city of Zhuhai in January this year. Sea Shepherd and WWSG urge the retirement of Pann in a natural sea pen in the national nature reserve. After all, she has already spent over 30 years in dolphin parks.

Sea Shepherd is gravely concerned by the lack of transparency in the international cetacean trade, where it is virtually impossible to track the movement of cetaceans from one facility to another. There is also little legislation in place to prevent the rampant trade of wild-caught cetaceans, with factual paperwork seeming purely arbitrary. Facilities rarely announce any deaths and are not held to account for the loss of lives in their care. They seem to readily accept death as part and parcel of the industry, simply replenishing their stock as numbers dip, with no penalty or legal repercussion in sight.

Sea Shepherd's stand is clear and firm — we are against any cetaceans in captivity in any part of the world.

In November 1999, Underwater World Singapore (UWS) constructed the Dolphin Lagoon, and bought six Indo-Pacific humpbacked dolphins (Sousa chinensis) from Oasis Seaworld in Thailand. Four of the six dolphins imported were established to be wild-caught as they were already more than 16 years old at the time of transfer.

The Indo-Pacific humpbacked dolphin is annexed under Appendix I of the Convention on International Trade in Endangered Species of Wild Fauna and Flora (CITES), which lists the most endangered among CITES-listed animals and plants. International commercial trade in wild-caught specimens of these species is prohibited. Unfortunately, these dolphins were all marked as captive-bred on their CITES permits due to a “clerical error”.

In September 2000, a female dolphin, Namtam, suffered a miscarriage. In March 2001, she died from acute gastritis.  Per studies, an inordinate number of captive dolphins are succumbing to stress-related illnesses such as heart attacks and gastric ulcers.

In February 2001, Pann gave birth to a stillborn calf. However, UWS continued unabated in their captive breeding efforts, resulting in Pann giving birth in 2002, 2008 and 2014. Her male offspring were called Splash, Speedy and Splish, respectively.

In April 2003, Jumbo, had to have 11 damaged teeth extracted after six months of suffering. UWS stated the damages were due to “fighting with another male dolphin through the bars”.

In October 2014, Sea Shepherd Singapore and WWSG investigated the condition of captive animals in the Dolphin Lagoon. A female dolphin, Han, was found to have a visible infection on top of her head and another distinct wound on the left side of her bottom jaw. These wounds were later revealed by UWS to be skin cancer. 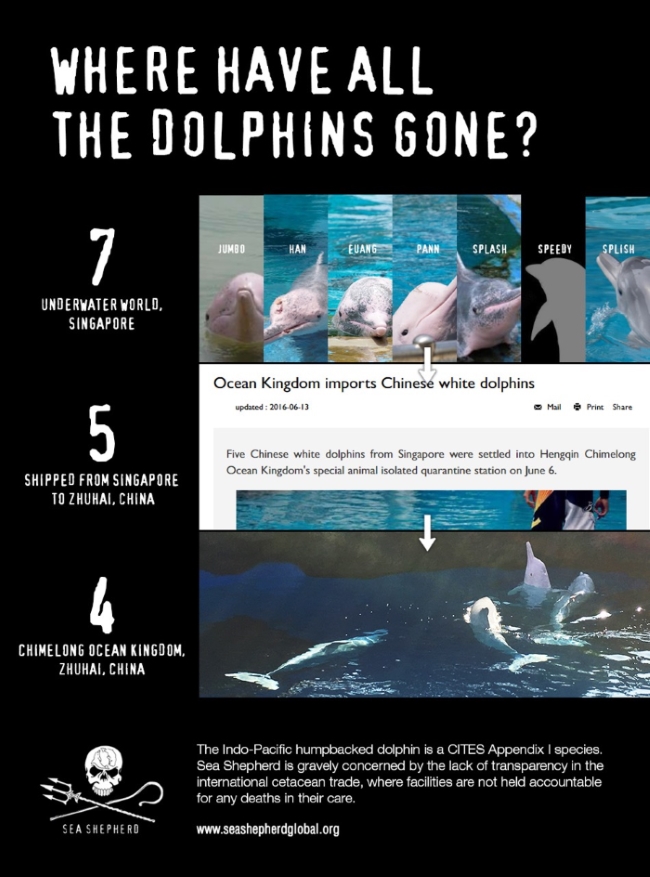 All photos by Sea Shepherd.