In 2018, Sea Shepherd UK launched Operation Mjölnir which for the first time documented an entire Icelandic fin whaling season from vantage points around Hvalfjordur, Iceland. In March 2022, Kristján Loftsson, CEO of the Icelandic whaling company 'Hvalur hf' stated in the Icelandic media that his two ships will once again be hunting vulnerable Fin whales (the second largest whale species after the blue whale) this summer. So Sea Shepherd UK and Sea Shepherd Iceland have partnered on a more ambitious campaign this year to expose the cruelty of the commercial hunting of fin whales around Iceland. Our crew will make sure Loftsson and Hvalur hf cannot kill Fin whales without the world seeing every pregnant whale killed while carrying their unborn calves, every illegally hunted Blue or Blue/Fin hybrid whale, every harpoon embedded in every whale brought back to the whaling station via our online articles, social media posts, news releases and live streams. 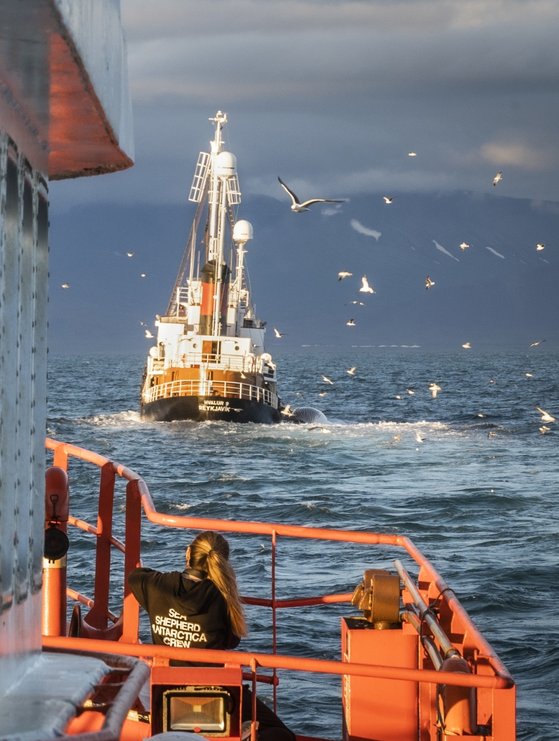 July 7th,  2022 - Sea Shepherd UK has announced the arrival of a chartered vessel in Iceland for Operation Northern Exposure The campaign has already officially launched on land with a crew made up of international volunteers together with Sea Shepherd Iceland, documenting each whale in images, videos and livestreams as they’re dragged back to the whaling station at Hvalfjörður for butchering. The addition of the chartered vessel with professional meadia teams onboard will also allow us to document the harpoon ships in action at sea for the first time.